UEFA: Who will win the Cups?

Who will win the UEFA Champions League and the Europa League? We take a look at the draw, the ties and the UEFA rankings of each of the teams. Will this be played by the book or will there be surprise factors kicking in? Our analysis starts with the Champions League. 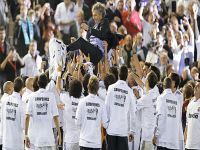 Analysis:  Only APOEL FC makes a mockery of the rankings. Of the other seven clubs, 4 are in the top 5 of the UEFA rankings and the other 3 in the top 20. For a start, Real and Barcelona can only meet in the final, by which time Mourinho will have had ample chance calculate how to beat FC Barcelona.

Although APOEL has punished those teams that seriously underestimated the Cypriots, such as FC Porto, to pass through the obstacle called Real Madrid defies logic. If Olympique de Marseille can use the cauldron factor in the first game and then play an intelligent second tie, the semi-final could be between Marseille and Real.

On the other side, Chelsea FC starts off in another cauldron, called Estádio da Luz, home to Sport Lisboa e Benfica. How many people know the full name of the former flag-bearer of Portuguese football until FC Porto came along in the 1980s to become the best club in the world several times? And how will Chelsea's ageing squad deal with the inferno at the Stadium of Light?

After the behaviour of the bootroom against André Villas-Boas, these spoiled brats deserve to come away from Lisbon with their backsides tanned, after all it was the same crap that set up Scolari. A handful of overpaid, now-under-talented pieces of excrement who have the mania the sunshine shines out of their nether regions. Their behaviour off the pitch says it all. Benfica will get revenge for AVB. Benfica-Barça, Barcelona wins.

Regarding the final, we have already spoken. The question remains, which Premiership team will Mourinho train next season? For those who go to Chelsea, it is better to write the contract yourselves. Manchester United? No way, José. They have won everything and can only go downwards.

Matches on March 29 and April 5

Analysis: If Valencia plays with the head in the Netherlands, then the semi-final could well be with their rivals in Madrid, should Hannover collapse in Spain and not be able to claw back the tie in Germany. In the other part of the equation, Sporting (which by the way is NOT "Sporting Lisbon" but rather "Sporting Clube de Portugal"), having eliminated Manchester City... could very well find itself facing Atlético Madrid in the final.