The bulk of the matches were played today after Russia's Rubin Kazan lost at home on Tuesday against Greek side Olympiakos. Braga had a home defeat the same day and today, Lokomotiv, Russia's other representative, Lokomotiv, takes a one-goal lead to Spain, against Athletic Bilbao. 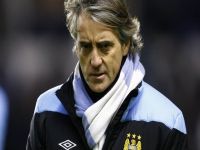 The best result of the day goes to Metalist (Ukraine), 4-0 away winners at Salzburg (Austria). FC Porto has to win in Manchester by 2-0 or 2-1 to force extra time; Atlético Madrid makes life very difficult for Lazio, winning away 3-1 and Manchester United takes a two-goal advantage against Ajax to Old Trafford. The other games are more balanced.