Students of Coimbra in Fairy-tale

Académica de Coimbra, traditionally a club whose soccer players are students at the world-famous Coimbra University, founded in 1290, lives another fairy-tale legend in its colourful history. Despite meagre resources, the senior soccer team has made it to the Portuguese Cup Final - for the first time in nearly half a century. 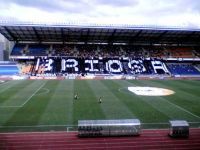 The all-black kit of the players of Académica de Coimbra is the mirror on the field of the all-black academic garments of the students of Coimbra, a University town in central Portugal, home to the University of Coimbra, one of the 15 oldest Universities in the world. There are few in Portugal who do not love Académica (except perhaps arch rivals União, from the same city) either as a first- or second-choice club - because traditionally and historically, the players are (or were until the 1970s) students at the University.

Académica reclaims its place in Portuguese footballing history - and who knows, next year, in Europe, from which it has been absent since 1972 - with an aggregate 3-2 win over Oliveirense (1-0 at home and 2-2 away) and will play the winner of tonight's game between Nacional (Madeira) and Sporting CP (Lisbon) in the final.

While there are those who will argue that the present club is not technically the same as that which won the first Portuguese Cup back in 1939 (due to the legal extinction of one organism and the relaunching of another) it is accepted that the current Associação Académica de Coimbra - Organismo Autónomo de Futebol is the heir of the previous organism Secção de Futebol da  Associação Académica de Coimbra (AAC). This means that put together with the position of runners-up in the Cup in 1950/1, 1966/7 and 1968/9, 2012 will be the club's fifth appearance in the Cup Final.

Académica's best classification in Portugal's highest league in football was second, in 1966/7. In Europe, Académica reached the quarter-finals of the Cup-Winners' Cup in 1969/70 and was twice present in the UEFA Cup, in 1968/9 and 1971/2, eliminated in the first round. Congratulations Académica!