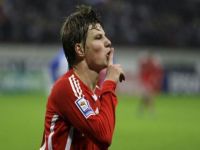 The soccer transfer window may have closed in western Europe but in Russia it is open for another month, meaning there may be a spate of transfers in the run-up to the beginning of the Russian Premier League in March. Anzhi Makhachkala is reported to have its chequebook out. And what is this about Mourinho?

Millionnaire Russian club Anzhi Makhachkala could be swooping in for Arsenal's Andrey Arshavin and Tottenham's Roman Pavlyuchenko before the Russian transfer market closes at the end of February. Premiership gossip surrounding Arsenal FC, however, where the Russian international midfield player has 18 months to run on his contract, say that Barcelona FC may be willing to take on Arshavin in the Summer transfer window.

Another Russian club interested in Pavlyuchenko is Lokomotiv Moscow, currently said to be in talks with the striker, under-used by Harry Redknapp at Spurs since he joined the London club in 2008 for a 14-million pound fee from Spartak Moskva.

Another Arsenal player in the Summer hotlist, but for Italy's Juventus, is striker Robin van Persie, in a possible 25 million-pound deal. 25 million pounds was too much for Manchester City to offload Carlos Tevez, meaning the Argentina striker is stuck without playing and without a club to go to. He last played in November before refusing to play in Munich as substitute and since then his attitude (going to Argentina without permission) has cost him 9.5 million pounds in fines, rising by 198,000 pounds every week (his wages).

Rafael Benitez and Joachim Loew have been named as possible successors to Real Madrid coach José Mourinho if he leaves the Bernabeu Stadium at the end of this season. Despite constant rumours, this is a big IF. The Portuguese coach has declared that he does not want to leave and Real boss Florentino Perez has said that signing Mourinho was the best thing he ever did. With the balance of power between Real and Barça just tilted Barça's way, the notion remains that Real is near to breaking Barça's dominance. The point is that Mourinho knows how to beat Barcelona, only there are those who would crucify him for playing that way.

Would Mourinho walk away before the job is done and with the fun just beginning?