Few were those who did not marvel at the skill, courage and passion with which Uruguay's heroes played in the last FIFA World Cup 2012 in South Africa and the victorious campaign in the Copa América, 2011. Behind the success is Óscar Washington Tabárez, El Maestro, hailed as UNESCO Champion for Sport. 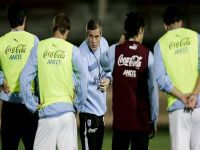 It was an honour to follow the Uruguay national soccer team led by El Maestro and the team captain Diego Forlán and a privilege to write up their wonderful games, an ode to modern football which left poetry on the pitch, they played with the heart, they played with the soul, they played as a unit, an immovable mass and an irresistible force which projected Uruguay to fourth place - and in 2011, victory in the Copa América.

The South American Coach of the Year in 2010 and 2011 has now been recognised and honoured by UNESCO as Champion for Sport. El Maestro will work alongside the UN Educational, Scientific and Cultural Organization promoting education and sports programmes for vulnerable children in Uruguay.

Washington Tabárez worked as a teacher in the 1960s, was a professional football player (defender) and has been a manager since 1980 in a career that has taken him around five countries (Uruguay, Columbia, Argentina, Italy and Spain) and his nomination by UNESCO is "in recognition of his commitment to promote education and sport programmes for vulnerable children in Uruguay, his charitable activities in the framework of the Tabárez Project, and his dedication to the ideals and aims of the Organization." Tabárez worked in literacy programmes for the underprivileged in poor neighbourhoods in Uruguay and dedicated himself to training and education for the handicapped.

Washington Tabárez takes up his position in a ceremony today in Paris which will be attended by Uruguay team captain Diego Lugano who plays at Paris Saint Germain.