The Incredible Hulk to stay at FC Porto

At 83 million pounds, or 130 million USD, the Brazilian international striker of FC Porto would be the world's most expensive player, ever. Despite the interest of Chelsea FC, it seems the Incredible Hulk, or Givanildo Vieira de Souza, will stay in Portugal to help Porto retain the championship. Abramovich is not interested. 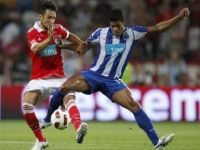 André Villas-Boas seems to be the centre of attention these days in the Premiership. After trying for the 25-year-old Brazilian striker Hulk and being informed that Roman Abramovich is not going to spend that type of money on one player, Chelsea appears to be the hub of a spate of possible deals which could see Frank Lampard move across the channel to join former boss Carlo Ancelotti at PSG, along with the Portuguese defender José Bosingwa, while Alex might be joining them. Inwards may be the Belgian midfield player Kevin de Bruyne, 20, and the Brazilian midfielder Willian, 23, from Shakhtar Donetsk, Ukraine.

Tottenham, also keen on signing Hulk but similarly put off by the record price tag, have Spanish clubs Granada and Villarreal on the trail of the Mexican midfield player, Giovani dos Santos, 22.

Meanwhile four Premiership clubs want the Sporting CP midfield player, Adrien Silva, 22. When is the international press going to learn that the name is not "Sporting Lisbon" but Sporting Clube de Portugal? Why does nobody make the same mistake with Benfica, full name Sport Lisboa e Benfica? The Premier League sides are Everton, Blackburn, Sunderland and Swansea.

Manchester City may be interested in signing up the 20-year-old midfield player Nir Biton, who plays for MS Ashdod, while rivals United and Liverpool are hot on the tail of the Denmark defender Jores Okore, 19. United is also interested in Dede, 23, a central defender from Vasco da Gama.