Boxer Nikolai Valuev too big for all ice holes 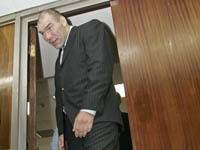 Russia's famous boxer Nikolai Valuev found it very difficult to celebrate Epiphany by bathing in the ice-cold water. In Russia, many Orthodox believers traditionally dip themselves in ice-cold waters of lakes and rivers to wash away their sins. They make special cross-shaped holes in ice to organize the Epiphany bathing.

Valuev was celebrating the religious holiday at a rehab in the Moscow region. Employees of the rehab made a special jordan (ice hole) for the boxer, which was larger than usual. However, the boxer did not feel comfortable in it either - it was too small for him.

The boxer dipped himself in the Epiphany ice hole, but was surprised to find out that it was a shallow one. "The water was only up to my waist in the deepest place of the ice hole. What is more - I had to come in from a side because I thought that the wooden platform would break under my weight. Nevertheless, the bathing was enjoyable. I feel that my body is so light. I am sure that I washed some of my sins away," Valuev said.

According to the boxer, he bathes in the ice-cold water every year. He tried to show it to others that there was nothing scary in bathing in the freezing water. Valuev inspired nearly 500 former drug addicts. All of them decided to brave the cold water.