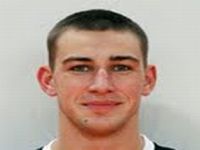 His name is Jonas Valancuinas and he is a candidate for the best junior basketball player in Europe. The Lithuanian number 17 in the team Lietuvos Rytas and Number 11 from the national team of Lithuania is 2.10 metres tall, 19 years old and weighs 105 kilograms. He is a force to be reckoned with.

Jonas Valanciunas - one of the best candidates for best youth player in Europe (Basketball). He is competing against the Spaniard Alejandro Abrines of the team UNICAJA, the Serbian Aleksandar Cvetkovic of Red Star Belgrade, the Italian Alessandro Gentile of Benetton Treviso, the Turk Enes Kanter of the team UTAH JAZZ in the United States of America, the Pole Przemyslaw Karnowski of the team Siarka Gezioro Tarnobrzeg, the Russian Dmitry Kulagin who plays for Triumph Lyubertsy, another Spaniard, Nikola Mirotic of Real Madrid, the Croat Dario Saric of KK Zegreb and finally the Georgian Tornike Shengelia who plays for the teamk Belgacom Spirou in Belgium.

Male and female basketball players who were born in or after 1991 are competing for the title of Best Basketball Player of the Year in Europe,awarded by the Federation FIBA EUROPA. Voting will take place in Europe until January 31 for the categories Men, Women, Male and Female Junior Players.

Translated from the Portuguese version by Ekaterina Santos

Original in the Portuguese version of Pravda.Ru