Torres torn between Spain and Italy; Premiership torn by racism 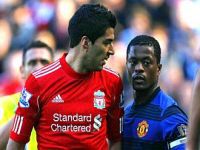 Fernando Torres has not made the mark at Chelsea - three goals in nearly a year breaking the English and British transfer record, was not why the London club paid Liverpool 50 million pounds. Malaga and AC Milan seem to be the possible destinations. Meanwhile the Tevez saga carries on as the Premiership gets to grips with racism issues.

Fernando Torres played 214 games for Atlético Madrid, scoring 82 goals, a further 102 games for Liverpool (65 goals) and just 25 games for Chelsea FC, scoring 3 goals in nearly a year - good for a defender, very dubious for a midfielder and pathetic for a striker.

It is said that Italian club AC Milan, after failing to land Carlos Tevez from Manchester City is trying to put together a package to lure Torres to Italy to try his luck in a different league, while others claim that Malaga is preparing to pay Chelsea FC 30 million pounds to bring the striker back to Spain. Chelsea meanwhile is looking at Juventus' Milos Krasic to reinforce the attack as André Villas-Boas gets ready to bid for the Championship and Champions League.

The Premiership is beset with two cases of racism. Liverpool's Luis Suarez was given an eight-match ban and a fine of 40,000 pounds for calling Patrice Evra a "black", something he claims is not illegal in Uruguay. He and his club are appealing against the sentence. The other case is an allegation that Chelsea and England Captain John Terry called Les Ferdinand a " f***ing black c**t " something that could earn him a seven-year prison sentence.

There are other allegations that El Hadji Diouf insulted a white ball boy at Everton when he was playing for Blackburn Rovers, saying "f*** off, white boy".

Those of us who have played soccer have been called all the names under the sun, we have been threatened that we would have our legs broken, we have heard our mothers' honour and behaviour brought into question, ditto our fathers', we have heard not only references to the colour of our skin and to our sexuality and but also what we or others do to various parts of our body and suggestions as to what else to do with them.

While racism is wholly unacceptable in today's society, a soccer pitch is not a place where you exchange gentlemen's pleasantries, debate the sex of the angels and discuss the finer points of a Rembrandt painting. In an "us and them" environment, with two sets of teams and fans and club colours, if calling someone "black" merits prosecution, then so should calling someone "white".

Or maybe everyone should grow up a bit and allow the feuding members of the grade/primary school playground to sort it out among themselves.