Barça: The Kings of the World 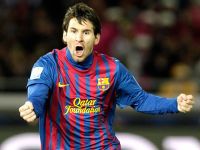 Forget Manchester United, forget Bayern Munich, forget real Madrid, forget Santos. There is one King of the World of Soccer and that is the mighty Barça, Barcelona FC, which thrashed Brazilian team Santos 4-0 to claim the World Club Championship in Japan on Sunday. The master of the match? Why, Messi!

Yokohama Stadium, Japan. The might of Europe against the Latin American giants, Santos of Brazil...the difference being summarised in one word: Messi. The Argentinean genius scored the first and the last goal of the match, devastating Santos with goals after 17 minutes and then on 83' sandwiching efforts from team-mates Xavi (24') and Fábregas (45'), both before the break, earning Barcelona the second FIFA World Club Championship.

If this was about Messi versus Neymar, then the Argentinean won the duel hands down but it was also about the team effort: Barça had a staggering 71% of ball possession and had 16 shots against Santos' 8. Neymar was gracious in defeat, showing tremendous sportsmanship:

"Today, here, we learnt how to play football, we received a lesson. Barcelona taught us how to play football. It no longer matters what was done but what does matter is to arrive here after many battles and to be the second best team in the world. Guardiola said he lost a lot before he began to win, I hope this happens to us too".

Barça's captain Puyol was equally gracious in victory: "We had a very good dame. It seemed easy but it wasn't, it was a very intense game played at a very great rhythm. We controlled the game from beginning to end. We dedicate our victory to Villa, who could not be here".