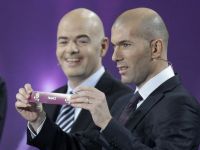 We take a look at the fourteen teams which join hosts Poland and Ukraine in the final phase of the UEFA EURO 2012 in June/July next year. We present the draw, the dates upon which the games are played and the FIFA ranking of each team. Finally, we produce a prediction as to who will be the champion.

Football pundits have to put their mouths where they put their keyboards and so I produce a prognosis based upon my analysis and the current ranking of each team, for the last eight.

By the book, the last eight would be:

Group A: Russia, yes, Greece no. Greece collapses at international events and I would go for the home factor, Poland and Russia.

Group B: Portugal is too unpredictable to be written off and Paulo Bento has an excellent group of players. Depending on who is available, I would go for Portugal and Germany in this group.

Group C: Spain yes, joined by Italy, whose experience and whose discipline and training among home-grown players will make the difference.