The Human face of Soccer: Gary Speed lays his demons to rest 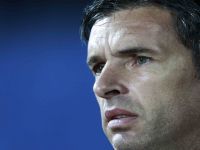 What made Gary Speed take his own life, hanging himself in his home, was certainly not worth his final action, yet that action has united the world of soccer in shock, dismay and grief at the loss of such a talented player and later, manager, who promised to take Wales to new heights. If ever there was an occasion to say Rest In Peace, this is it.

The reasons for Gary Speed hanging himself in his home are not, in my opinion, anyone else's business outside his close family circle and they are certainly not mine. In such a tragic circumstance and rocked by a monumental roller-coaster of emotions as people question themselves what could have triggered so final and definitive a statement on his own life - he had appeared on BBC only hours prior to his death - let us dedicate this space to celebrating his life and the immense pleasure this talented and very nice man brought to millions of soccer fans.

A midfield player of singular energy, skill and vision, Gary Speed received the MBE award (Member of the Order of the British Empire) in 2010. In his international career he played three times for Wales Under-21s and a further 85 times for Wales' senior team, scoring seven goals.

His managerial career started with Sheffield United (August to December 2010) but this was interrupted by the Welsh Football Association which asked Gary Speed to manage the national team, a job which be began on December 14, 2010, during which time he achieved remarkable statistics, taking Wales to 5 victories in 13 games (5 defeats, 13 goals scored and 13 against), including a winning streak never before witnessed by Wales - five victories in seven games, establishing the bases for a promising career in the qualifying stages of the next World Cup Finals in Brazil.

Outside soccer, Gary Speed was known for his extreme politeness and humility, finding time for everyone, speaking with the fans patiently and being as much a class professional off the pitch as on it.

Married for fifteen years, Gary Speed leaves two children and a wife devastated; he leaves this world with many happy memories and many great games and so he leaves the world of soccer that much poorer. As Gary Speed lays his demons to rest, let us remember the many good moments he brought to the game, to his country, to his clubs and to his team-mates and let the spirit of Gary Speed, his good-natured, human approach to what goes with being a professional sportsperson and a public figure be a lesson to remember for everyone in future, a leaf to copy and a reminder to those who use sport to engage in personal vendettas that soccer in particular, and professional sport in general, can have a human face, and that face is Gary Speed, who I recommend for Pravda.Ru Sportsperson of the Year.