It's official - Manchester United and Wayne Rooney mean business this season and what a flying start to the 2011-2012 campaign the team - and striker Wayne Rooney - has had. Five games, five victories and Rooney has scored 9 of the twenty-one goals. 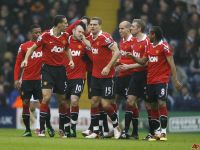 In today's 3-1 drubbing of André Villas-Boas' Chelsea FC at Manchester United's home stadium, Old Trafford, Wayne Rooney scored his ninth goal of the season, in his own words, the best start to a season this 26-year-old striker has ever had. Manchester United went into the break 3 goals ahead (Smalling, 8; Nani, 37 and Rooney, 45). Chelsea pulled one back on 46', through Torres.

The scoreline, however, does not really mirror the match, which in the words of Sir Alex Ferguson, was like a basketball match, with attack and counter-attack entertaining both sets of fans all afternoon.

Wayne Rooney has scored in all of Manchester United's first five games. The results are as follows: