Becks back to England? 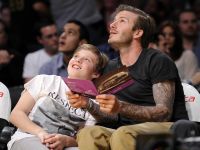 David Beckham seems set to return to England and more specifically, London, where two Premier League clubs are waiting to sign him after his contract with LA Galaxy (Los Angeles, USA) runs out this November. The England midfielder and former captain, now 36, will be looking for Premier League experience to play for Team GB in the 2012 Olympics. Neymar for Barça?

The two Premier League clubs set to fight over David Beckham, the former Manchester United and England captain, are newly-promoted QPR - Queen's Park Rangers and Spurs - Tottenham Hotspur FC, both vying to sign the 36-year-old midfield player when his contract with LA Galaxy expires in November. Beckham had a spell with Spurs between seasons but did not manage to break into the first team for insurance reasons.

It is said that Spurs coach Harry Redknapp is very keen to have Beckham around in the dressing room and in the squad, due to his vast experience and because of the fact that he is a positive, good-natured person who can stabilise and create a competitive squad.

Manchester City remains permanently in the headlines, both on and off the pitch. Chief executive Garry Cook has handed in his resignation after allegations that he mocked the mother and agent of defender Nedum Onuoha when she claimed to be fighting cancer and still acting as the agent of her son. Garry Cook had said his account was hacked but resigned as a consequence of the negative publicity surrounding the case.

The next target for Manchester City boss Roberto Mancini is the Italian midfield player Alessio Cerci. City had tried to get this player during the Summer transfer window.