It's kick-off time! Eto'o for Daguestan! 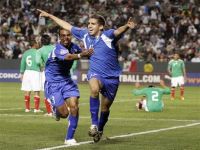 How are the European leagues shaping up after the start of the season? Most leagues have already had a game or two - the Spanish and Italian Leagues are going to start next weekend, but in Russia, after 21 games, the season is more than half-finished, having a total of thirty matches. CSKA Moskva and Zenit St. Petersburg battle it out for top spot, the Moscow team having a two-point advantage at present.

In England, the two Manchester teams are in first and second place, City ahead on goal difference. Wolverhampton Wanderers (Wolves) are third, all on 6 points after two matches. In the German Bundesliga, after three games, there are two teams with seven points, Borussia Moenchengladbach and Hannover 96. Bayern Munich is third, followed by FC Shalke 04,  Werder Bremen, Dorissua Dortmund and TSG 1899 Hoffenheim, all on six points apiece.

In France, Montpellier Hérault SC is the only club with a 100% record - 9 points after three games, followed by AS Saint-Étienne (7), SM Caen (6), Olympique Lyonnais and Evian Thonon Gaillard (5) and Stade Rennais FC on 4 points. FC Porto (who else?) and Académica de Coimbra sit on top of the Portuguese Primeira Liga with 6 points each from two games, followed in third place by SL Benfica, SC Braga and Vitória FC (Setúbal), all with four points.