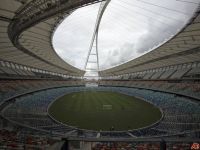 For those of us who did not have anything much to say during the Summer, and not being English do not have cricket to tide us over, the torture is over...the new Soccer season has begun with the beginning of national Super Cups, leagues and now, the play-offs for the Champions League and Europa League.

On Tuesday and Wednesday this week, we have the final play-off stage for access to the Champions League (composed of Champions and the best-placed teams in the respective Soccer championships in the UEFA member states). The winners will continue in the Champions League and the losers will drop down to the Europa League (composed of the teams in second, third, fourth, fifth or sometimes sixth place in their championships, depending on the respective strengths of the same).