Arsenal: To rebuild or not to rebuild?

Arsenal: To rebuild or not to rebuild? 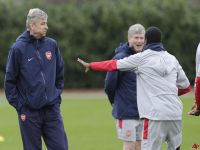 Arsene Wenger is without doubt a brilliant soccer manager who has gained numerous trophies in three clubs in as many countries. Why then has he not won a major trophy in the Premiership in England since 2005? Part of the answer could well be seen in the fate of his best two players, Fabregas and Nasri...set to leave the London club before the season gets under way.

Now that Arsenal FC captain Cesc Fabregas and Samir Nasri threaten to leave the London club, is Arsene Wenger's future going to be based around whether he contracts new foreign players or uses the club's youth policy?