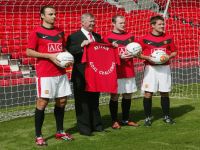 The first victory of the season for Manchester United, in the first match - the FA Charity Shield (English Super Cup) against arch-rivals Manchester City, 3-2 after trailing by two goals at Wembley Stadium - sends a clear message that Manchester United FC means business in the 2011-2012 Soccer season.

City got off to a great start, scoring two goals without reply in the first half, through Joleon Lescott (header) and Edin Dzeko (long-range shot). After the break, United came back, no doubt stirred by a famous Alex Ferguson rocketing in the dressing room.

Chris Smalling tapped the ball in after an Ashley Young free kick and the Portuguese forward Nani levelled 2-2 before the hour mark. Nani scored the winner on 94' as United threw down the gauntlet to their premiership and European rivals for the new season.

Manchester United enjoyed more of the possession  56% to City's 44% and had twice as many shots on target - 12 against 6, as well as 9 shots off target compared to Manchester City's two. City had eight corners to United's seven, and also led in the fouls, 14 against 11 from United.