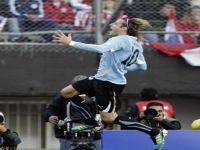 Uruguay has won more Copa America championships than any other team. On Sunday the two lions in the Uruguay attack, Diego Forlán and Luis Suarez, shot the Celestial Blues into a 3-0 victory over Paraguay to hoist their country's fifteenth Copa - one more than Argentina.

Diego Forlán once again led a Uruguay team brimming with talent - the team that came back from South Africa in fourth place and a team which left its mark on Latin American football in this season's Copa América (Latin American Championship of Nations) in Argentina, becoming the first team to win the trophy fifteen times (Argentina has won it 14 times and Brazil, 8). Forlán, striker for Atlético de Madrid, voted Best Player at the FIFA World Cup in 2010, scored two goals in the final against Paraguay, after Luis Suarez, now of Liverpool FC, had broken the deadlock on 12 minutes.

Forlán's brace of goals equalled the scoring record for his country - 31, alongside Hector Scarone and his 82nd game also broke the record for international appearances. Forlán thus becomes the third generation of his family to lift Copa América - his grandfather and father were also Uruguay internationals and champions.

Oscar Washington Tabarez has built a tremendous team which promises to dominate the sports pages and the annals of soccer history for many years to come.

President Mujica received the team on Sunday night on arrival in Montevideu from Argentina amid scenes of delirium, ending their triumphant tour through the capital city at the Centenary Stadium, where 70,000 delighted fans cheered their victory long into the night.

This victory gives Uruguay a ticket to the Confederations Cup in Brazil in 2013.