A Falcon hangs over Europe 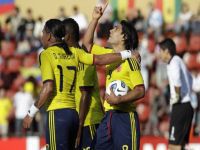 His name is Falcão. Radamel Falcão, and he is one of the best strikers in Europe with a proven record. Still a player for Portugal's prestigious FC Porto, it now becomes clear that his ex-manager Villas Boas (Chelsea) and Villas-Boas' former boss Mourinho (Real Madrid) both want the Colombian.

The latest rumours from Real Madrid, quoted by the British daily newspaper Daily Mail, point towards José Mourinho placing Falcão at the top of his shopping list during the Summer transfer period to reinforce his attack as Real eye Barcelona FC, their arch rivals, aiming to knock them off their pedestal. With Mourinho traditionally having his best season during his second year, Real are raring to go.

FC Porto, understandably, do not want to see their all-conquering side of 2010-2011 split up, now that the team coach André Villas-Boas has gone to Chelsea FC. FC Porto won three domestic trophies - the Portuguese Championship (undefeated), the Portuguese Cup and the Portuguese Super Cup and the Europa League, in which Falcão (25) scored a record 17 goals - the most a player has ever scored in one season in a European competition.

Falcão won the Argentinean Primera División with River Plate in 2008, was a major part of FC Porto's victorious season 2010-2011, and apart from his European record, was the top scorer of the Portuguese Cup 2009-2010, scored the best goal of the Champions League in the same season and was a member of the Dream Team of America in 2007.

No wonder, then, that he has Europe at his feet.

But will he leave FC Porto? The Colombian has said he has two more years of his contract to go and that he is perfectly happy at he club ably run by President Jorge Nuno Pinto da Costa, who since 1982 has turned it into one of the most successful sports clubs in the world.

The secret? On limited budgets, good ties with scouts and agent networks, players are bought cheap, given a window on Europe, win titles and are sold at huge profits, keeping the club solvent. Pinto da Costa also has an eye for when a player is nearing or past his peak and thinks strategically when a cycle is coming to an end, rebuilding and constantly renewing his teams with the right players and managers for the right moment.

A dream club which is a factory of dream teams.