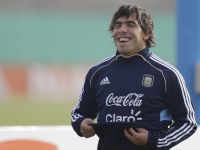 The next chapter in the Carlos Tevez saga at Manchester City is...he may be leaving Manchester for Brazil. Corinthians has offered the 35 million pounds (40m. EURO) on his rescission clause, which may be enough to tempt City and bring the Argentine star back to the club he represented for two years.

Carlos Tevez , 27, played for Brazilian club Sport Club Corinthians, of São Paulo, between 2004 and 2006, when he scored 25 times in 38 appearances. His transfer took place in January 2005, when Corinthians paid Boca Juniors of Argentina 13.7 million GBP (15 million EURO) and he landed the 2005 Brazilian Championship and becoming the first foreign player to win the Best Player award from the Brazilian Football Confederation before heading off to England, playing for West Ham United (26 appearances, 7 goals), Manchester United (63 appearances and 19 goals) and now Manchester City (43 goals in 63 games).

Tevez had requested a transfer move back in December 2010, claiming he wants to be with his family. His wife took their two daughters back to Argentina, saying she was not enjoying living in Manchester and stating she would prefer a place with a different social life.

There are rumours that City would be interested in Corinthians' bid for the team captain but only if they increased it. A possible substitute for the Argentinean striker would be Atlético Madrid's Sergio Aguero (45 m. GBP, 51 m. EURO).