Fábio Coentrão has Europe at his feet 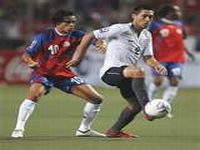 Two years after joining Benfica from the relatively obscure Rio Ave in northern Portugal, Fábio Coentrão has managed to make himself the most expensive left back in the history of soccer, transferring to Real Madrid for 30 million Euro.

For Nacional (Madeira) he scored 4 times in 15 games, then for Zaragoza in Spain, played once, and finally back at Rio Ave, three goals in 16 appearances. Back at benfica, from 2009 to 2011, 8 goals in 47 appearances for the club of his heart.

Yet outside Benfica, he only wanted to play at Real Madrid. Since the end of last season he has described the club managed by José Mourinho as the only one that would take him away from Benfica, saying "It is the greatest club in the world".

With José Mpourinho behind him and a back four including fellow Portuguese Rocardo Carvalho and the Portuguese-Brazilian pepe, Fábio Coentrão has all the conditions to build a career which prepares the conditions for his children and grandchildren to live a life of luxury.

The rest depends upon him.