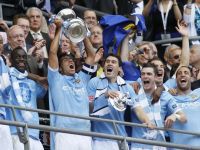 The Carlos Tevez saga seems to be dominating life at Eastlands, with the Argentine star declaring once again he is unhappy at the northern English club and wants to move somewhere where he can be with his family. The decision passes by his wife, who has hinted that Italy has the conditions for the family to be happy.

Nobody can blame the wife of Carlos Tevez for not wanting to live in or anywhere near Manchester. Not because it is a boring city, not because it is ugly, but for someone brought up on sunshine and blue skies, northern England's drab and dreary climate must be as depressing as it gets. For this reason, certainly, she insists that she cannot live there, and has taken Tevez's daughters with her.

Nobody can blame Tevez, a doting father, for wanting to be near his children, who he has called the centre of his life and who he insists he wants to live near. At 27, he is at the peak of his career and his maturity as a player.

However, nobody can blame Manchester City Football Club either for wanting to hang on to their star, neither can anyone blame the Eastlands club for imposing the conditions of the termination of contract clause, thought to be worth in the region of fifty million pounds (55.6 million EURO or 80 m. USD).

The get-out clause is complicated but things very much on the side of City and its Chairman Khaldoon Al-Mubarak, who knows that the striker signed a contract until the end of 2014.

Tevez had already asked for a transfer in December but agreed to stay. Milan has been named as the favourite destination by the Tevez family, and a swap deal had been arranged earlier in the year with Inter striker Samuel Eto'o - but it did not work out due to the fact Inter declared it could not meet the player's wage packet - said to be 200,000 GBP per week (222,500 EUR; 322,000 USD)

The other side of the coin is what right had a player who earns ten million pounds a year for kicking a football around a field and who willingly commits himself through contract to his club and its fans, to hold the club to ransom. For that sort of pay packet, none. The ball is therefore very much at the feet of Manchester City who ultimately hold the trump card: the future of Carlos Tevez as a soccer player depends on the goodwill of City and on the wallet of anyone mad enough to fork out fifty million pounds plus 200,000 pounds a week for someone who tomorrow might do the same thing again.