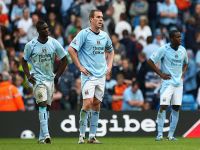 Roman Abramovich's wallet is opening again. The Russian billionaire, owner of Chelsea FC, is rumoured to be set to open the bidding for the 50 million pound clause freeing Argentina striker Carlos Tevez from Manchester City and committing to Stamford Bridge.

The Manchester City star has long been quoted as being dissatisfied at Eastlands -or at least in the North-West of England and sources at Chelsea FC say he might be happier in the capital city, London. Tevez might team up with fellow Argentinean Javier Pastore, after the Palermo player expressed his desire to move out of Sicily.

These are not the only players to express their desire to move. Japan's Keisuke Honda has said loud and clear that he wants out of CSKA Moskva, where he feels "stuck" and has apparently contacted Liverpool FC and Arsenal FC as potential buyers.

Back to Manchester City, a club which has so far spend over one billion pounds of infrastructure and players. Or rather, its owner, Sheikh Mansour bin Zayed al-Nahyan, has. Now he is set to open his purse again. Manchester City is determined to sign Tottenham Hotspur FC midfield player Luka Modric who has a starting tag of 30 million pounds.

For now, Dedryck Boyata, the 20-year-old Belgium defender, seems to be on the way out of Eastlands