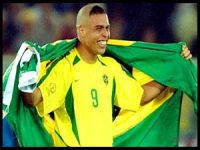 The Phenomenon: Ronaldo, scorer of 15 goals in World Cup finals for Brazil - a world record for the two-times FIFA World Cup winner, 3 times FIFA Player of the Year award, EUFA Golden Boot, among many other titles - hangs up is boots today, Tuesday June 7...officially, although there is some talk of continuing to play exhibition matches.

There is no doubt that the mesmerising football of Ronaldo earned him the name of "Phenomenon" on the soccer pitch. However, those who know him well say that he was even better off the field, having an easy-going manner and getting on with everyone, not just football professionals but fans, or anyone else he met.

He won trophies in practically all the clubs he played in: the Brazilian Cup and Minas Gerais Cup for Cruzeiro; the Dutch Cup for PSV; the Spanish Super cup, Spanish Cup and European Cup-Winners' Cup in Barcelona; UEFA Cup with Inter; Intercontinental Cup, 2 Spanish Championships and the Spanish Super cup with real; the São Paulo Championship and Brazilian Cup with Corinthians. For Brazil, he hoisted two FIFA World Cups, the Copa América twice, the Confederations Cup once and a bronze medal in the Olympic Games.

His individual prizes underline his amazing talent, being one of the pioneers of the step over, a move used by forwards to wrong-foot their opponents before beating them - many times Ronaldo would use it to skip past not only one, but three adversaries (on occasion even a whole team) before rifling the ball into the net. He was named FIFA player of the year three times, won two Ballon d'Or prizes, 2 Onze d'Or, World Soccer Best Player of the year three times, UEFA Golden Boot (1), Bravo Trophy (2), Best FIFA World Cup player (1), Golden Foot (1), among others. 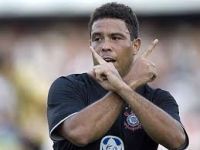 In his last game for Brazil against Romania today he plays for the last quarter of an hour of the first half. The game takes place at the Pacaembu Stadium, São Paulo, at 21.50 (Brasilia).

"You can't find a player like Ronaldo anywhere in the world. He is so sensational that he knows when to shoot or pass. He can also drop back 40 years, win the ball and go off on runs taking on whole defences on his own".