Hiddink back to Chelsea? 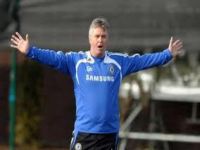 Arm wrestling inside the Turkish Football Federation and a tempting offer by Roman Abramovich's Chelsea FC may see Guus Hiddink leave the Turkish national team and go back to Stamford Bridge.

Guus Hiddink's last passage in Chelsea was as caretaker manager in 2009, when he won the FA Cup. It is said that he is unhappy that the President of the Turkish Football Association, Mahmut Ozgener, who brought him to Turkey, may be replaced in an interim election - and the Turkish FA is said to be resigned to the fact that Hiddink will go it Chelsea pays the rescission clause.

Hiddink's club career as manager has been successful - he won the Champions League with PSV Eindhoven in 1988, six Dutch Championships, 4 Dutch Cups, the Intercontinental Cup with Real Madrid and the FA Cup with Chelsea. In his international career, he took the Netherlands to the quarter finals of the Euro 1996 and also fourth place in the FIFA World Cup in 1998; in 2002 he took the Republic of Korea to fourth place in the FIFA World Cup and in 2006, got Australia to the second round of the same competition. Two years later, he took Russia to the semi-final of the Euro 2008.

With Carlo Ancelotti sacked, the door is open at Chelsea FC. However, Roman Abramovich has  a soccer lesson to learn. You do not win titles by changing the manager every year. Sir Alex Ferguson was nearly sacked by Manchester United before he went on to take the club to its place of glory in the annals of world soccer.