Showdown: Manchester United vs. Barcelona - one must go ahead 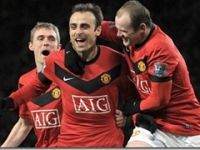 Ten games, three wins, four draws and three losses apiece - the clash of titans between two of  the richest soccer clubs in the world at Wembley Stadium, London on Saturday May 29 when Manchester United and Barcelona will see which one of them pulls ahead after victory in this year's Champions League final.

Gary Lineker, ex-England striker who played for Barcelona from 1986 to 1989, considers that Barcelona start the game as clear favourites, not only because the side has Leonel Messi, but because the Catalan team keeps ball possession, and once they have the ball, it is virtually impossible to get it off them.

Barça coach Pepe Guardiola, however, has declared it is "an honour" to be facing Sir Alex Ferguson again, a coach who he respects and considers "great". Manchester United's boss, however, claims he has a "burning desire" to win his third Champions League trophy and Manchester United's fourth.

For United Captain Nemanja Vidic, Leonel Messi is not the only problem - he picks out Xavi and Iniesta as being equally dangerous running forward. For Vidic, the United players are still smarting from the defeat to Barça in Rome two years ago - this may help, providing inspiration along with the need for concentration until the final whistle.

"Obviously Barcelona are a great team and they'll have a lot of possession in the game, but we'll also try to exploit their weaknesses. All teams have weaknesses," he concludes.

For Patrice Evra, Manchester United is out to seek revenge for the 2-0 defeat. He claims the players will not look back again on the game with frustration and regret. While stating that he respects Barça, Evra declares: "I want to make sure we show all the fans and ourselves as well that we are Manchester United".

With the advantage of the Wembley crowd, Manchester United have a better chance than ever. For the Reds, the game will be decided on how many chances the United forwards miss and how much concentration the team can muster at the back. For the blau-granats, it will be to what extent they are able to impose their own style of play.