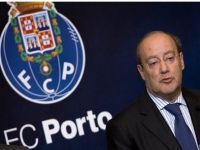 What a season for Portugal's FC Porto - today they won the Portuguese Cup, beating Vitória de Guimarães 6-2 after winning the Europa League, the Portuguese Supercup and the Portuguese championship, in this case unbeaten. It is the 53rd title of club President Jorge Nuno Pinto da Costa.

James Rodrigues was the hero of the day, scoring 3 of FC Porto's 6 goals. André Villas-Boas' team went ahead after 3' (Rodrigues), Guimarães drew (own goal by Álvaro Pereira) on 20' and within a minute, FC Porto was ahead again (Varela), only for Guimarães to once again draw equal on 23' (Edgar). FC Porto added another three before the break -  Rolando (35'), Hulk (42') and James (45'). FC Porto's goalkeeper, Beto, defended a penalty on 43'.

In the second half, FC Porto controlled the game and the result, adding the sixth after 73' (James).

The Presidency of Pinto da Costa at FC Porto (since 1982) is a case-study in sports management. He has taken a regional club and turned it into the ninth most successful football club in the history of the sport, worldwide. The scouting network is second to none, FC Porto managing to find the right players for the positions, successfully and consistently building a team spirit and providing players with windows of opportunity in the generally successful runs in international competitions, a policy which enables FC Porto to sell players at a huge profit and balance the books of what is not one of Europe's richest clubs.

This management gives FC Porto the capacity to fight as equals alongside the giants such as Real Madrid, Barcelona, Manchester United, AC Milan and so on.