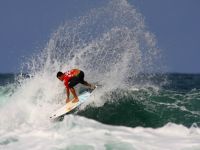 From Minas Gerais, Brazil, the leader of the world surfing ranking is Adriano de Souza who places his country at the top of the list for the first time in the history of the sport. De Souza won the Billabong Rio Pro 2011 at Barra da Tijuca, Rio de Janeiro and with this victory leapfrogs to table-topping position

The contest finished this Friday at Barra da Tijuca, Rio de Janeiro, Brazil, with the victory of Adriano de Souza over world number three, the Australian Taj Burrow - a historic victory because it places a Brazilian at the head of the surfing ranking for the very first time. The other Brazilian in the final phase was Raoni Monteiro, beaten by Australia's Bede Durbidge, eliminated in the semis by de Souza.

With ten-time world champion Kelly Slater (USA) eliminated on Thursday by fellow American Bobby Martinez, things were looking up for Adriano de Souza, who took advantage of the final in the best possible way. Martinez had in turn been eliminated by Taj Burrow.

The next event will be from July 14 to 24 at Jeffrey's Bay, South Africa.