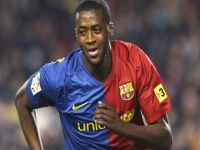 The last time Manchester City won anything was back in 1976, the League Cup. Thirty-five years of nothing were broken today, the first trophy in a new era under manager Roberto Mancini and the money of Sheikh Mansour bin Zayed al-Nahyan.

Yaya Toure scored the winning goal against arch rivals United in the semi-finals and today sealed City's glory on 74' with the only strike of the game.

Stoke City keeper Thomas Sorensen put up a wonderful display in the first half, but was fighting a losing battle as his team froze on the day. Although the coach Tony Pulis tried to breathe some fire into his team at the interval, Stoke remained frozen in the second half - a shame for the end of a wonderful cup run but also, a team which conbsolidated its position in the top half of the Premiership.