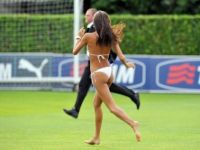 If anyone has the right to give opinions about soccer, it is me. My entire life has revolved around a soccer pitch, I have always felt at home with soccer players, speaking about soccer, I was a player, I was a manager, and my eldest son is a player. I breathe soccer through the pores of my skin.

I am also perhaps the only person in the world who has the absolute right to speak out about racism. My eldest son's four grandparents were born in four countries in three continents. I think that is wonderful.

So when someone gets busted on a soccer pitch for calling someone else a "monkey", as was the case with Barcelona's Sergio Busquets (calling real Madrid's Marcelo "mono" = ape)...hmmmm.

One thing is being a racist, another is having the intelligence to understand the psyche of a soccer pitch and its players. If one thing annoys me, it is intellectuals sticking their prissy noses into the area belonging to sport, because no sports person sticks their nose into intellectual pursuits. Innit?

To be honest, I have been called all the names under the Sun as a soccer player, and the conjugation of adjectives and nouns would be so astonishing that I would not dare publish them here. So the main idea I am trying to impart here is let us focus on sport, because most sports persons know very well what they say and do and couldn't care less about the colour of the skin of their opponent.

Sticks and stones may break my bones but words will never harm me, so the adage goes. Being a racist is attacking people who are considered as an unwanted entity in a given society. It is not mouthing off on a soccer field.

If I were Sergio Busquets, I would make a very rude sign with the middle finger and leave professional soccer.