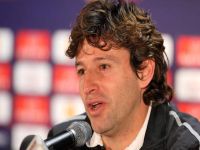 SC Braga v. FC Porto, two clubs from the north of Portugal, are to dispute the Europa League Final in Dublin, Ireland on May 18. Braga beat Benfica (also Portugal) 1-0 and FC Porto beat Spain's Villarreal 7-4 over two legs, despite losing tonight in Spain 3-2. One thing is certain: hail the new era of Braga coach Domingos Paciência.

Domingos Paciência was a star forward player for FC Porto, a club where he learnt the ropes...and how. He has guided Sporting de Braga, also in northern Portugal, to a third/fourth spot in the Portuguese league and their first ever final of a UEFA competition. After losing 2-1 at Benfica (Lisbon) last week, SC Braga won tonight 1-0, with a 19' minute goal from Custódio. Aggregate 2-2, Braga win on away goals.

In Dublin, two of Europe's best young coaches will be confronting each other - Braga's Domingos Paciência and Porto's André Villas-Boas, both products of FC Porto.