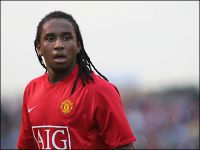 The two greatest teams on Earth this year are set to meet in the final of the Champions League - England's Manchester United and Spain's Barcelona, after Barça knocked out arch rivals Real Madrid 3-1 and United thrashed Germany's Schalke 04 6-1 over two legs.

After United's 2-0 victory away in Germany in last week's first game, tonight's return match at Old Trafford produced more of the same: four goals against one (Valencia on 26' and Gibson on 31' for United; Jurado pulled one back after 35'; then two second-half goals from Anderson, 72' and 76').

Schalke had more of the ball (55% against 45%) and nine shots against United's ten. However of these, United had eight on target compared with Schalke's 4.

United and Barça will play at Wembley Stadium, London, on May 28 - a rematch of the final in 2009 (Rome) won by Barça (Eto'o and who else? Messi). This time, Manchester United will be far stronger, and will present a team which Pepe Guardiola did not see tonight - Sir Alex Ferguson only played two of the team which one in Schalke 2-0 in the starting line-up.