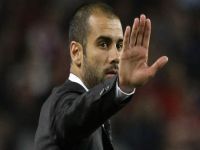 Those who hoped Mourinho would wave his special wand and create magic tonight in the Camp Nou were disappointed. Without interference from elements like Valdano, The Special One is getting nearer to dethroning the Catalan masters but the 1-1 draw sees Real crash out of the Champions League.

The 1-1 draw tonight after the 0-2 defeat at home by Barça means that José Mourinho's Real Madrid lose this tie 1-3 on aggregate.

In the first game last week in the Bernabeu Stadium in Madrid, Barça stole the show, José Mourinho's Real Madrid playing second fiddle to Pepe Guardiola's Barcelona, losing 0-2 to two late goals by Leonel Messi after 76' and 87', the fruit of increased pressure by the Catalan team: 11 shots against Real's 8 and a massive advantage in ball possession - 72% to 28%.

Pepe's sending off just after the hour did little to help the home team, although Mourinho had trained extensively with ten elements on the field. Messi's first came from a deft pass from Affelay, the second was pure magic - he skipped round four Madrid players to fire home.

In tonight's second leg, Barcelona again attacked more (10 shots against two and ball possession 64% against Real's 36%), translated into Pedro Rodriguez's goal after 54'. Real replied through Marcelo on 64' but it was not enough - the damage had been done in Madrid.

Next season and without outside interference, José Mourinho will show his real colours. This Barça side is fantastic, has been playing together for many years and its players seem able to play with their eyes closed. However, all good things come to an end.

The Spanish First League is about to witness a new cycle: The Mourinho cycle.