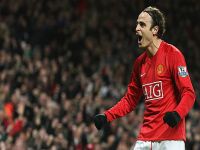 The class Bulgarian striker Dimitar Berbatov will not be playing for Manchester United in the first leg of the Champions League semi-final against German team Schalke 04 on Tuesday, due to injury, it has been confirmed from Old Trafford.

Groin injury will keep Bulgarian striker and Manchester United top scorer Dimitar Berbatov out of Tuesday's first leg of the Champions League semi-final with Schalke 04 in the Veltins Arena, Germany. Apart from Berbatov, Manchester United chief coach Sir Alex Ferguson confirms there are no other injuries.

Ahead of the game, Schalke says its team is not afraid of Manchester United, while United has a few records to break: midfield player Ryan Giggs will be the most-capped British player in European competitions, while goalkeeper Edwin van der Sar can equal the record of Claude Makelele, playing 13 semi-final appearances in the Champions League and if he does not suffer goals, he will be the first to keep 50 clean sheets in the competition.

Manchester United is unbeaten in this competition this year.