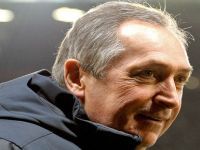 Aston Villa FC coach Gerard Houllier, 63, has been admitted to hospital after being taken ill. He is undergoing tests and his condition is reported as being stable and comfortable.

The squad is behind the manager -  Assistant coach Gary McAllister is taking the training sessions for Aston Villa FC. In 2001, when manager of Liverpool FC, Houllier had surgery for heart problems. Aston Villa currently occupies tenth positon, a secure place, in the Premier League in the English Championship.

Darren Brent, Aston Villa's England striker has been quoted by BBC as saying: "Obviously everyone in the squad wishes that Gerrard has a speedy recovery and that he is back soon, but yeah it was a big shock to all the players. But the main thing is his health and that he gets that right and hopefully he will be back soon."

Aston Villa's fans have also pronounced their support and respect for their manager; McAllister said that this is very, very important for Gerard Houllier.