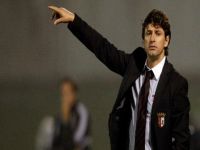 For the first time in history, three Portuguese clubs are in the semi-finals of the Europa League and two will meet each other: Benfica and Braga, while FC Porto faces Villarreal (Spain). Spartak was overpowered tonight by a demolishing FC Porto looking more and more like the all-conquering teams which won two Champions League and two world titles.

Spartak was again outclassed tonight in Moscow by a demolishing FC Porto, perhaps one of the best sides in the world at present. Hulk (28), Rodriguez (45+2) and Guarin (47) scored for the visitors before Spartak pulled one back (Dzyuba, 52). Falcao scored his fourth of the tie on 54', Ari pulled another back (72) and Ruben Micael finished the game on 89'.

PSV nearly made a game out of the tie, scoring two goals (Dzsudsak, 17' and Lens, 25'), needing at that point one goal to draw and win the tie on away goals. Benfica weathered the storm and came back before the break - Luisão on 45+3'. Oscar Cardoso added Benfica's second on 63' (penalty).

Aggregate: Braga 1 - Dínamo Kiev 1 Braga goes through on away goals

Curiously enough, Braga did not score a single goal against Dínamo, because the goal scored in the first leg (away) was an own goal by Gusev. This is what puts the Portuguese side through to meet Benfica in the semi-final.

The Dutch side pulled one back theough Bajrami (32) but the Spanish team controlled the game, goals coming in the second half from Rossi (60', penalty), Marco Ruben (84', penalty) and Cani, on 90'.