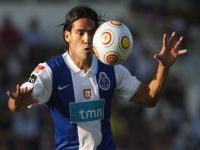 Europe might be about to control Portugal's finances, but the Portuguese soccer clubs in Europe are Kings - excellent results for FC Porto, SL Benfica and SC Braga make it probable that the semi-finals will be restricted to the Iberian Peninsula - Villarreal also made sure that Twente Enschede has its bags packed.

Dínamo scored twice - Yarmolenko on 6' and Gusev in his own goal on 13', fixing the result in a balanced game which was excellent for a surprising campaign by SC Braga, ably managed by ex-FC Porto player Domingos Paciência.

A one-sided game in which the visitors were thrashed by a Villarreal side showing confidence and control: Marchena (23), Borja Valero (43) and Nilmar (45+1) gave the Spanish side a 3-0 advantage at the interval, coming back with two more from Rossi (55) and Nilmar's second on 81. Twente replied on 90+1 (Janko).