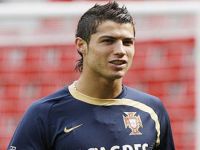 The Spanish side outclassed brave Tottenham Hotspur FC 4-0 with goals by Adebayor (4, 57), Di Maria (72) and Cristiano Ronaldo (87). The statistics say it all - Real had 11 shots on target against Spurs' 1, 14 off target against 3 and 64% to 36% of ball possession. Tottenham were not helped by a Peter Crouch sending-off on 15' Gareth Bale had his moments but the Real tide was relentless from start to finish.

The London team have to score 5 against Real in the second leg. Realistically, Spurs' campaign is over - but this was the first time the team had reached the Champions League quarter-finals. Full marks to Harry Redknapp.

Inter got off to a flying start on 1' with a goal from Stankovic. Schalke replied on 17' (Matip). The Italian side went ahead on 34', goal from Milito, only for the Germans to enter the break level, the 2-2 coming from Edu on 40'.

After the interval, Schalke scored three more - Raúl Gonzalez scored after 53', Ranocchia scored an own goal on 57' and Edu got his second after 75'. Inter have a mountain to climb in the return leg in Germany, which Schalke needs to manage with a minimum of effort.