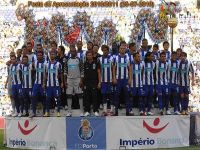 FC Porto has won the Portuguese soccer championship, so far without a defeat. The magnificent blues and whites sealed off their classic win with five games to go, with a 2-1 win over arch-rivals Benfica, in Lisbon, clinching the eighteenth championship in the last three decades.

FC Porto is a good example of excellence in a Portugal looking to find itself. What better example in sports management that FC Porto President Jorge Nuno Pinto da Costa, who since he took over the Presidency of the club in 1982, has won no less than 51 titles: 18 Portuguese championships, 11 Portuguese Cups, 16 Portuguese Super Cups, 2 European Championships, 1 UEFA Cup, 1 European Super Cup and 2 Intercontinental Cups - making him the most successful manager in the history of international sport.

Under the able management of President Pinto da Costa's three decades in his position, FC Porto has won 18 championships (against Benfica's 8, Sporting CP's 3 and Boavista's 1). With 5 matches to play, FC Porto 2010-2011, with the national championship and the Portuguese Super Cup already in the bag, is in the quarter-finals of the Liga Europa and the semi-finals of the Portuguese Cup.

The secret: stability. While the main rivals in Lisbon, Sporting SC and SL Benfica, are fraught with internal lobbies and power games (an Achilles' heel in Portugal), FC Porto fights as a single unit, in which the key words are discipline and dedication to the club - and if anyone steps out of line either on the field or off, Pinto da Costa knows about it and out they go.

Pinto da Costa has devised an admirable scouting system, acquiring excellent players cheaply, giving them a showcase for the rest of Europe to see due to FC Porto's constant presence in one of the European competitions - which it wins despite the billionaire competition of clubs like Barcelona, Real Madrid, Manchester United, Manchester City and Chelsea, among others - and then selling them for excellent prices.

In comparison, Sporting Clube de Portugal, which cannot even get UEFA to call it by its proper name and is labelled with the ridiculous "Sporting Lisbon", while being one of the best soccer schools in Europe, producing world champions such as Luis Figo and Cristiano Ronaldo, is a factory of excellence but in comparison does not match FC Porto in productivity, as one can see by the titles won.

A good example of FC Porto's acquisition system is Hulk - the powerful striker Givanildo Vieira de Sousa, 24 years old, a Brazilian powerhouse who FC Porto found in the backwaters of Japanese football. His 21 goals this season have seen him claim his place as the Primeira Liga's best goalscorer. Once again, Pinto da Costa has built a winning team and in André Villas-Boas, Portugal's youngest ever champion at 33, seems to have found the new Mourinho, under whose wing Villas-Boas developed his coaching skills.

And let us remember where Mourinho began his successful projection into the history of world soccer.