Injury-hit Scotland warms up for Brazil 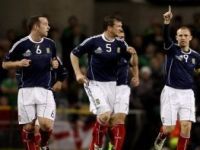 The countdown is on and the clock is ticking away before next Sunday's showdown in the friendly soccer match between Scotland and Brazil in the Emirates Stadium in London. Scotland will be short on firepower, however, after Steven Naismith reported injury.

Glasgow Rangers' midfield player Steven Naismith has been ruled out of Scotland's friendly soccer match against Brazil on Sunday March 27 in Arsenal's Emirates Stadium, London, after his team's win over Celtic in the Scottish league Cup this weekend (Rangers won the Co-operative Insurance Cup final over their arch-rivals by 2-1). Naismith suffered a groin strain.

Brazil manager Mano Menezes is calling up Inter Milan's Leandro Damião after AC Milan's Alexandre Pato (twisted ankle) and Villarreal's Nilmar (muscular pains) reported injuries. Damião, 21, has scored 13 goals in just 8 games for Inter, where he has signed a new contract for the next five years. Other Brazilian youngsters who will be in Menezes' line-up on Sunday are Neymar (19) and Lucas (18).