Cesar Luis Menotti, 72, the Argentine coach who led his national team to glory in 1978, has been interned suffering from a lung infection. Taking a courageous position supporting the political left at a time when his country was held in the grip of a Fascist dictatorship, we pay homage to this visionary, wishing him a speedy recovery. 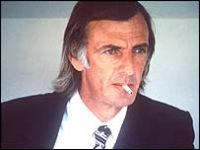 Cesar Luis Menotti is interned in the Hospital Italiano in Buenos Aires, suffering from a lung infection. El Flaco (the thin one) is 72 years old and has had a long and successful career as a soccer player, manager, teacher...and world champion.

His managerial career was even longer (Club and titles):