A mixed night for the three Russian teams still in the Europa League competition: CSKA and Zenit lost, Spartak had a great result away at Ajax. The three Portuguese teams won against top class opponents; the three Dutch sides had a win, a draw and a loss, while both English teams crashed to defeat. 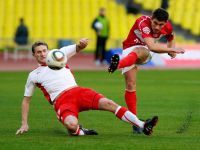 FC Porto, the experienced Portuguese soccer club, came to Moscow today and beat CSKA with a 70th minute goal scored by Guarín, leaving the Russian club a mountain to climb in the second leg in Portugal on March 17, in the city of Oporto in northern Portugal. To remember, FC Porto is unbeaten in the Portuguese League so far this season, having thrashed main rivals SL Benfica 5-0.

FC Porto had the better of the game in the Luzhniki Stadium, with 13 shots, 8 on target and 5 off, compared with CSKA's nine shots (6;3), while FC Porto, winners of the Champions League (2004), World Championship Intercontinental Cup (2004) and UEFA Cup (precursor to the Europa League) in 2003, got 6 corners to CSKA's 2... in Moscow!

Braga, another team in the Portuguese championship, got an excellent result against Kenny Dalglish's Liverpool FC, with an 18th minute penalty by Alan. Braga got the better of a tactical game with 4 shots apiece, 2 on target and two off for both sides, while Liverpool's aggressiveness was translated into 6 corners to Braga's 3, and 8 offsides against 1, meaning that Braga coach Domingos Paciência (former player of FC Porto) had done his homework well.

The Dutch side drew at home with last year's Scottish champions. Attacking more, PSV had 12 shots but only one on goal, against Rangers' 3 (one on and two off target).

What a game of soccer. Kadlec, M. opened the scoring after 33' at the BayArena Stadium, Rossi equalising before the break. Nilmar put the visitors in front with his first goal on 70'; Castro equalised 2 minutes later and Nilmar got his brace in the dying seconds, on 90+4'. The home team had the advantage, with 9 shots and 11 corners against the Spanish side's 4;4.

An amazing result for Spartak, the goal by Alex on 57' being the only one chalked up tonight in Amsterdam. Ajax had 13 corners to 0, 17 shots to 3...but Spartak soaked up the pressure and leave the Dutch side everything to do in Moscow.

Star-studded billionaire Manchester City FC was sent home with a sore head from Ukraine, losing by 2 goals to nil. Shevchenko opened the scoreboard on 25' and Gusev wrapped up the game after 77'. Dynamo had 11 shots against 6; City had 6 corners to 2.

Last year's Portuguese champions (this year already 11 points behind FC Porto) reacted well after Luyindula had put the French side ahead on just 14'. Maxi Pereira equalised before the break (42') and Jara added the second on 81'. The return game in the second leg in Paris promises much since this was a very balanced encounter. Shots on target 6-5; Shots off 8-6; corners 5-6.

Zenit left Holland thrashed. De Jong scored on 25' and 90+2' and Landzaat the second goal on 56'. Zenit however was unlucky - seven shots on target (same as Twente) and three off (against 6) and 8 corners to 2.

Zenit must do far better in St. Pete's.