Pelé: Where is the love of sport?

The best player in the history of soccer, Brazilian number 10 Pelé, said on Monday that the obsession for money, high salaries and power of entrepreneurs in the negotiations may be a danger to the future of the sport. 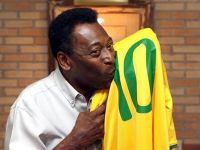 Speaking to journalists in Hong Kong, the king of football has made the case that players should enjoy the game, without considering it a high-paying job. "Players should never forget the love of the game and the team," said the Brazilian, before kissing the shield of New York Cosmos, a club that he played for after retiring from Santos and of which he is honorary Chairman.

Describing the role of agents in football today, Pele, 70, spoke about the commercialization that guides the work of entrepreneurs. "Do not worry if the player is good or not. They want to sell the player and get the money. It is also a danger to the future of football," he said.

Pele is in Asia on a promotional trip for New York Cosmos, a tream which wants to come back to compete in the American League in 2014. The Brazilian ace played for Cosmos from 1975 to 1977. The original Cosmos competed in tournaments from 1971 to 1985. After the collapse of the American League in 1985 the project collapsed and now there are attempts to rebuild the team.