Russia and Portugal have the most teams represented in the Europa League's last 16 - with three each after losing one apiece: Sporting CP of Portugal lost out to Glasgow Rangers (Scotland) and Twente Enschede (Netherlands) got the better of Rubin Kazan. 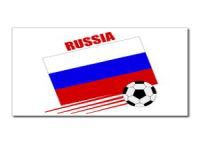 The three Russian teams to pass through to the last 16 are CSKA Moskva, Zenit S. Petersburg and Spartak Moskva, all of whom had to come back from a goal down.

On Wednesday a goal by Ignashevich (rebound from Love's penalty) was enough to earn CSKA Moskva a draw at home to PAOK on 80' after the Greek visitors had taken the lead after 67' through Muslimovic. CSKA now face the experienced Portuguese side FC Porto, twice winners of the Champions League and one-time winners of the UEFA Cup.

Zenit also came back from a goal down at home to Young Boys Berne. Jemal put the visitors ahead on 21' and then the Russian team came back with goals from Lazovic (41'), Semak (52') and Shirokov (76'). Zenit go through on aggregate 4-3 and meet Twente Enschede of the Netherlands.

Spartak Moskva also suffered an early goal at home to Basel: Chipperfield put the Swiss side ahead after 15', levelling the scores on aggregate (however Spartak won the first leg away by 3-2). The Russian team clinched it on 90+1' with a last-gasp goal from McGeady. 4-3 on aggregate, now Spartak face powerful Dutch side Ajax.

Rubin Kazan had lost the first leg at home to Twente Enschede 0-2 and had it all to do this evening in the Netherlands. The Russian team did well to draw 2-2 (Ansaldi, 22' and Noboa, 24') put the visitors ahead levelling the tie, but the Dutch came back either side of the interval turning the game around - Janssen on 45+1' and Douglas immediately after the restart on 47'.