Ronaldo, the Phenomenon, hangs up his boots

From Ronaldinho to Ronaldo to Fenómeno - Ronaldo Luís Nazário de Lima, after eighteen years of electrifying soccer fans across the globe, has decided to retire from the sport. His 62 international goals for Brazil in 97 appearances, and 247 in 343 games at the highest level in club football say it all: he is truly a Phenomenon. 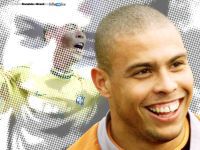 Ronaldo (born in 1976) began his playing career in Cruzeiro (Brazil) in 1993, scoring 12 times in 14 games then was persuaded by Romário to try his luck in Europe. Due to his age, he soon became known as Ronaldinho (little Ronaldo), a nickname which was later taken over by Ronaldinho Gaucho.

His list of achievements is also phenomenal - having been only the second football player to win the FIFA World Player of the Year award three times alongside Zinedine Zidane; unlike Zidane he won 2 World Cups (1994 and 2002) and is to date the highest scorer in the history of World Cup final phases, with 15 goals.

The pioneer of the "double leg over" move leaves football with the following statement: "It was a great career, marvellous and emotional, with many defeats and an infinity of victories. I know that I made a lot of friends and I also know that I leave the sport without any enemies... Four years ago I discovered that I suffered from a problem which slowed down the metabolism. To control this problem, I had to take some hormones which are forbidden in football due to doping...Many comments on my weight are due to this problem but I do not feel any rancour against those who made these claims. My career ends due to injury. I can't stand the pain any more. I could go on but I have to accept this defeat. I lose this game because of my body".

Ronaldo, the phenomenon, will now dedicate himself to his family and his business interests.