One thing is certain: Nobody likes Tottenham Hotspur FC more than Russian striker Roman Pavlyuchenko. However, what is running through the mind of Harry Redknapp, Spurs' manager? The fact that Roman has not been given the chance to prove himself, and he is getting fed up. 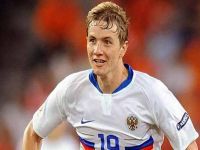 The Tottenham Hotspur FC manager, Harry Redknapp, is without doubt one of the best at his job in the Premiership and had his chances of taking over at England not been temporarily scuppered by unfounded rumours at a critical moment, England may have come home from South Africa with some silverware.

There is no doubt whatsoever as to the striking credentials of Roman Pavlyuchenko, and striking they are. For Spartak Moscow, 109 goals in 187 games; in the Premiership, 33 goals in 83 games. Russian Premier League top goalscorer twice. In 2010-2011, he has played 4 games in the European campaign - and scored four times.

However, Redknapp prefers the striking duo of Peter Crouch and Jermain Defoe who between them this season have amassed the stunning total of two league goals (Crouch 2, Defoe 0) in a combined total of 35 games. Pavlyuchenko, in 25 games, has been given just 9 starts and has been used as substitute a staggering nine times...even so, he has produced more alone that Crouch and Defoe put together - 5 league goals and a total this season (including all games) of nine goals in 23 games.

So why doesn't Redknapp choose him? "He doesn't speak much English so it's difficult to speak to him about it". Er...use a (rude word) translator? In which part of his anatomy does Harry Redknapp keep his brain?