Spanish League: Clash of the Titans

David - Leonel Messi (FC Barcelona) and Goliath - Cristiano Ronaldo (Real Madrid CF), both voted World's Best Soccer Player, are locked in a Titanic battle in the Spanish Liga to see who finishes the season with more goals. This weekend the Argentinean forward scored a hat-trick while the Portuguese striker replied with a brace. To date, both are accredited with 24 goals. 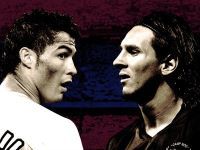 Real Madrid's Portuguese Number 9, Cristiano Ronaldo dos Santos Aveiro (born February 1985) is nearly two-and-a-half years older than Barcelona's Leonel Andrés Messi (born June 1987). They are both arguably the two best forwards in the history of soccer/football. Cristiano Ronaldo was voted the World Soccer Player of the Year in 2008, Leonel Messi winning the same award in 2009, after winning the World Young Soccer Player of the Year in three successive years from 2006 to 2008.

As the titans clash, they leave the rest of La Liga trailing in their wake. This weekend Messi scored another three goals in Barcelona's 3-0 demolition of Atlético de Madrid, while Ronaldo scored two in Real's 4-1 win over Real Sociedad.

It remains to see how long this fascinating duel goes on...or whether one day they will join up in the same team.