It took Uruguay's Luis Suarez only a few minutes to make his mark on his new club, Liverpool FC, after his last-minute dash from Ajax, entering the game against Stoke City as substitute and scoring his debut goal. He promises much. 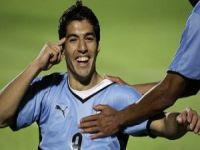 For those who had any doubts about Suarez's temperament or footballing ability, the Uruguayan provided the perfect and timely answer. It will take a while to set up a striking partnership with new signing Andy Carroll, because the ex-Newcastle player is suffering from a thigh injury but Luis Suarez has already eased himself into the team, the league and the club.

Certainly the Liverpool fans, buoyed by three straight wins and a move up to seventh place in the Premiership under new coach (and former idol as player and coach) Kenny Dalglish, will give Suarez and Carroll the warmest of welcomes, as they come in to replace Fernando Torres, whose move to Chelsea FC caused some sour comments among Liverpudlians. John Aldridge, the former Liverpool striker, has been quoted by the Daily Mail as claiming that Torres is a "fake and a fraud who has spat in the faces of the Liverpool supporters who idolised him".

The forthcoming summer deals are already making the pages of Europe's main sports newspapers. Among these is the possible transfer of Nicholas Anelka from Chelsea to New York Red Bulls, to join up with his former French teammate Thierry Henry.

Meanwhile London rivals Arsenal are still hot on the trail of Paris Saint Germain's defender Mamadou Sakho (20). Coming in to Chelsea may be a hatful of players, before the FIFA Financial Fair Play rules come into play.

In Manchester, City show interest in the Aston Villa forward player Ashley Young and Belgian winger Yassine El Ghanassy while United are looking for a goalkeeper to replace he veteran Edwin van der Sar, who is retiring in the Summer. Brazil's Júlio César (Inter Milan) has declared he is happy in Italy and does not want to come.