Chelsea FC have pulled off a last-minute coup minutes before the January transfer window slams shut - the signing of Spanish international striker Fernando Torres from Liverpool. Chelsea's other big signing of the day, the defender David Luiz from Benfica, will be completed in Lisbon due to a flight delay. 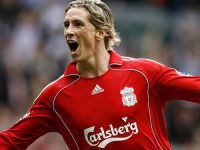 Chelsea FC's bank account opened once more as the London club scooped up Liverpool's Spanish striker Fernando Torres for 58 million Euro, plus the Brazilian international defender David Luiz from Benfica, a deal said to be worth 25 million Euro. 83 million Euro in one day for two players.

When David Luiz was pulled off the flight to London, British press sources speculated that the deal was off. However, due to the fact that the flight was slightly delayed, the Brazilian defender would have arrived after the contract could have been finalised in the UK, so the solution was to stay in Lisbon, sign it there and send it to Chelsea FC.

Liverpool meanwhile have snapped up Newcastle United's Andy Carroll (22) to replace Torres (26) in the attack and Kenny Dalglish already has Luis Suarez signed from Ajax to make a striking partnership with him.

Leicester City have signed the former Portuguese goalkeeper and the scourge of England's penalty takers, Ricardo on a short-term contract.